I have always been fascinated by African-American oral history. I have been a writer, embracing that title, since I was 8. In looking at this documentary, this all-out love letter to Black America, Beyonce outdid herself.

The documentary is two hours of behind the scenes, unabashed, full-throttled Blackness. I was brought to tears no less than four times. The most beautiful thing? The quotes used by other icons of Black history, including Alice Walker, WEB DuBois and my beloved Grandmother Oracle, Toni Morrison.

I knew I was in for something special when the documentary opened with this quote:

“If you surrendered to the air, you could ride it.”

(This quote is taken from Song Of Solomon, quote and book by Toni Morrison)

Beyonce talks about her pregnancy, how rough it was, and what the comeback from those health issues meant. She talks about her desire to have gone to an HBCU and why those experiences at an HBCU she witnessed growing up still mattered to her. In bringing all that love and representation, how could you not love this woman? How could you not desire to gas a Black woman up? Support her? Treasure her? Protect her?

Imma say it:  how can you see HOMECOMING and call a Black woman a bitch? 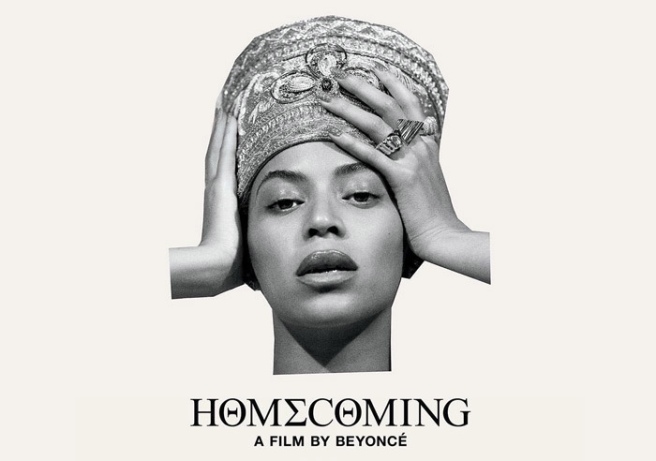 What I did not know, until Beyonce’ revealed it, was she is the first African American woman to headline this show, since its inception in 1999. For more scale on this achievement, and at the same time this now perceived unimaginable thing, I graduated in 1999. Officially twenty years ago this June. Twenty years ago, Beyonce was still part of Destiny’s Child. No iPhones. Dial-up internet. CD players. Sprint still cut your bill off for having a past due balance of less than $5.00. In twenty years time, it is hard to imagine any venue that Queen Bey hasn’t headlined or conquered!

Have I been a fan of Beyonce? Yes. For a while now. However, seeing her in this light, with this confidence, sense of self, and this power? It is incredible. As a woman of faith and ambition, to see Beyonce traveling in these creative realms wielding executive power while being Black, woman, mother, wife–reminded me that I can keep going.

That I can indeed be what I cannot see–yet.

There is a power to this documentary that you have to be Black to feel and understand. You gotta get that this was for US. Beyonce gave this to US. The world can enjoy it, but it doesn’t belong to the world. This was her reminder to us that she is still here. She is still paying attention and ain’t going no where. It was a love letter to Black America that, in the midst of all this chaos, all this murder and mistreatment, that we are LIT–and don’t act like you not. Lena Horne said that you aren’t born second class, that you have to be taught that. As WHO RUN THE WORLD was performed as only Beychella could turn it out, I thought about what Phyllicia Rashad said, “Your own self is such a treasure.”

As the documentary ended, I thought of my mother. Who was invested in me when I wanted nothing to with myself. Her anchor quotes to me where these three:

“Let no one change who you are.”

“Don’t die with your dream in you.”

Alice Walker said, “Our mothers and grandmothers danced to music…not yet written.”

The music is being written…and so are the lyrics.