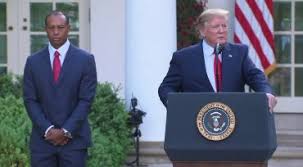 I remember when Eldrick ‘Tiger’ Woods really became a household name. I remember during my high school years just how cool it was to know there was dude that was Black, golfing! GOLFING! And was like, GOOD at it!

As much that is said about Jackie Robinson, you must give him this. No matter where Jack went, according to accounts and his widow Rachel (now in her 90’s), he was Black. And unapologetic. He was Black in Cairo, Georgia. In California at UCLA. In the Negro Leagues as a Kansas City Monarch. He was Black in Montreal in the MLB minor league for the Brooklyn. He was Black as #42 (2B) in Ebbets Field. He never had the gumption, or the option, to deny any part of him that was Black. Or Black and male. His college education, speaking ability, military record, speed in cleats didn’t diminish the fact he was Black.

So, why did Tiger think this wouldn’t happen with him? How did game change–for him? What really made him think these stodgy, old White men would change–for him? We know that some White athletes disassociate themselves from the plight of their non-White teammates:  see Tom ‘Eptiome Of Mediocre White Male aside from my former brother-in-law Rob Bilbruck’ Brady. He is on record, with a MAGA hat in his locker said this (taken from The Intelligencer in December 2015): “I haven’t paid attention to politics in a long time. It’s actually not something that I really even enjoy. It’s way off my radar.”

Now, to be fair, I have linked the article for you to see the entire exchange. But, I find it interesting that he wouldn’t go to visit President Obama after a Super Bowl win. However, got mad at his predominately Black teammates when they didn’t want to visit the White House to see Orange Thanos.  Then, he wanted to invoke the responsibility of his teammates to go.

My problem with Eldrick ‘Tiger’ Woods, whom is the son of a Black man, is you do not get to disconnect your Blackness from your social awareness. Your Blackness is your social awareness! I can take–nay, expect!–stupid, vapid comments from athletes who are better suited to be QB’s on the latest version of Madden! I can handle that, because his privilege is an insulator–impervious to logic.

The fact that Tiger Woods, went to the White House to accept the Presidential Medal of Freedom from a man that  is misogynist, clearly xenophobic, and a sympathizer to a/the white supremacist cause?

That let me know that he has no longer decided to rent a room in the Sunken Place. He bought property! Funny thing, though.  This same award that was given to heroes and artists, is now given to him. I can only see as a a noose he can wear and show off to people. Sometimes, it be your own people, man.

I said what I said.

[images from fox8.com and nymag.com]