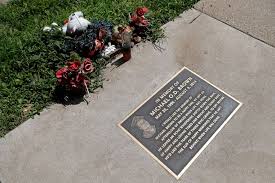 At the time of this posting, Michael Brown, Sr. called for the current St. Louis County Prosecutor, Wesley Bell, to reopen this case. Read more about that here.

I have lived in St. Louis Metropolitan area for the greater part of my life. When Michael Brown, Jr. was murdered by Darren Wilson–five years ago yesterday–there was no part of me that questioned why he killed him. None!

I have seen the farce that is Blue Lives Matter. The flag is toliet paper. Tell a friend.

When Wesley Bell won this election last year against Robert ‘Bob’ McColloch, my heart was overwhelmed. But, I had no peace. I had no peace because this is, still is, Missouri–or as some people refer to it as Mississippi North. There are still towns in this state I do not feel comfortable driving in, through or towards because of the general feeling of distrust, fear and unease! The fact is, this police officer killed this young man. He killed him because pro-police culture, city government indifference, and the fact Bob McCulloch’s father was supposedly killed on duty–by a Black man no less? Oh, why would Officer Darren Wilson of the Ferguson Police Department with White police chief Tom Jackson, with County Prosecutor McCulloch in office not think he would be protected?

As it was with the first chattel slaves beaten on whims; to slaves raped and murdered; to slave patrols and klansmen whom have day jobs as law enforcement, murder of Black men by nefarious men with social clout is not new! Police officers are not an endangered, as the token Black pundit, Candace Owens, is paid to say. The lies police officers tell to control the narrative are endangered! The worship of law enforcement as an unquestionable entity is endangered!

Police are being questioned, and people are not liking their answers. People are questioning the merit, skillsets and honor of those called to protect and serve:  who do neither!

I make no apologies for being angry.

This young man was old enough to be my brother. Or son! As a mother, I could never have sat in the house as this unfolded around me and my surrounding community. We have every right as a people to be enraged! We are no longer pleading for attention, and sometimes a riot is the best way to let people know you are no longer playing with them!

It is not longer okay to kill men, women and children whom are Black and think no one is going to say something! We are tired of seeing our children become ancestors due to the zeal and impunity of badged Reapers! The police are not the keepers of a city–the people are.

I want Wesley Bell to reopen this case. I want to know exactly what Bob McCulloch told the grand jury that made them think this was okay; why he never challenged Darren Wilson on the lies he told; I want him to slap Tom Jackson with the things he hates:  facts. I want the lawyers that lied for McCulloch to be disbarred!

I want the wrath of the law to be felt by the powerful! What better way to demonstrate that power than to confront a chief tenet of white supremacy:  police officers. You cannot kill with impunity. You cannot serve at convenience. Protection does not make exemptions for race, and Blue lives don’t exist.

If your protection and service are steeped in racism, which dehumanizes me or invalidates my life along with those I love, a riot should be the least of your worries.