Yesterday, after the year-held sigh of relief at her murder conviction was expelled, what followed next was unexpected. As with social situations like this, my social media was alight. My inbox my alerted, and what I saw was a Mammie in baliff’s uniform.

Now, for those of you that are new to this corner of the righteous, woke, well-read Black innanet, there are certain stereotypes which follow Black people:  Mammie (some people spell it Mammy), tragic mulatto, wench, Sapphire.  A Mammie/Mammy is this Black woman that lives to serve, cooking and cleaning and tending White children. They are seen as these superheroes without personal desires, depth or personhood independent of that which is given from a White gaze or narrative.

But let’s move on. 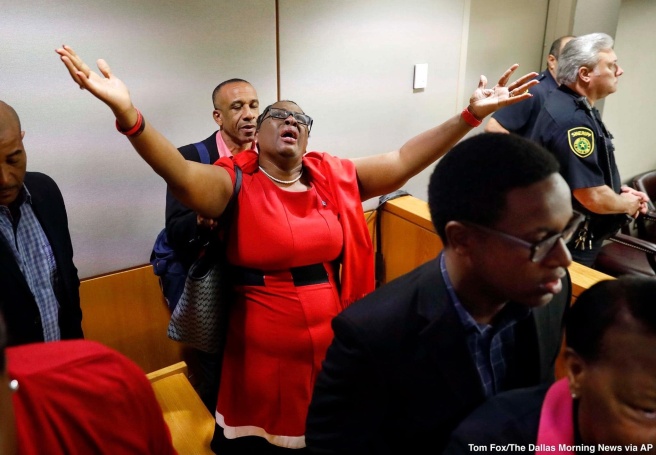 There aren’t enough surviving, ambitious reticent Mammies to coddle all the misbehaving White women in this nation that need release and relief! I refuse to believe that was an accident–and that 15 second clip has gone viral in the matter of 24 hours!

However, the thing that is not discussed, or scrutinized as heavily is the Black Dallas PD officer that defended what Amber Guyger did! As always, the brunt and blame fall to Black women. That is unfair, and is not right and we need to talk about this.

For the Black officer that vouched for Amber Guyger. You are trash, fam. You are so trash that you cannot even be sat out with the other trash! The fact of the matter is he testified as a token–I said what I said. I don’t take it back.

What needs to be discussed is the relationship some Black men have to power especially in the proximity and association to/with white supremacy. As the Urban Prophet TI said, “If the con is good, I ain’t supposed to see it!”

And I have seen it before! And over and over again!

What is not often discussed is the history of the Fraternal Order of Police. If you know your history, you know that modern policing (and its methods) are based in fugitive slave law practices–namely the Fugitive Slave Law of 1850. If you are a student of history, for every press towards the high mark towards equality, the police have done two things:  stymie and enforce. Stymie the progress of minorities (whomever they may be). Enforce the narrative and wishes of their masters–keep all the people that scare us, whom we have harmed, whom we stole from, whom make my wife nervous is public in check–by any (deadly) means necessary.

You need only look at recent history to see that–how the police are used as a mitigating force between the good white folk and the meddling, needy outsiders who trouble the ruling classes for freedom, justice and to the pursuit of happiness.

This is deeper than any “Blue Wall.” This is deeper than just trying to be a comfort to this murdering police officer! This construct of serving and protecting has racist roots from a poisonous tree! As the prosecutor said before the jury came back yesterday, “Convicting her doesn’t mean that you hate the police.” Just as me giving observation and asking questions doesn’t mean I hate the police.

The fact is, police need policing! The current permutation of law enforcement still needs an overhaul. Is it better than it was a century ago? Yes. But there is still so much further to go. The fact that this bailiff mammied to her, and she is vilified for it is one thing. But the sole onus of the chaos of this trial is not to be carried by this 15 second action! What we will not do is make her carry all this water by herself! The Black officer that agreed to vouch for what she did–saying she did everything her training said she could–needs to be drug a little bit as well!

What we miss in times of upheaval like this is the real enemy is the institutional, systemic and oppressive racism steeped and held in place by white supremacy! Amber Guyger killed a man in his house while eating a bowl of ice cream he bought, while on his couch, minding his business! She gets on the stand and cries (what most basic White women do after they have been caught doing something) and says how sorry she is. And people are supposed to comfort her, because that is what society tells us to do!

Learn the game so you can play it better.