It is no secret that my oldest daughter loves comic books. As a happy Blerd mom, this thrills me. It wasn’t until she started liking Harley Quinn that I got a little nervous.

My daughter is old enough to have crushes, like boys so I know the odd boyfriends and tastes are coming (she actually likes Chris Pratt, Russell Wilson and Tom Holland at last count–I’m okay with that). However, it came to a head when we went shopping for socks.

She had seen these Harley Quinn socks and asked for them. Cool! Not an issue! I, too, like Harley Quinn! I remember seeing her on Batman:  The Animated Series in high school. Even as a high school sophomore, there was something odd about their relationship. I didn’t like how he (Joker) treated her (Harley). The whole dynamic was crazy and toxic! So, when I saw the pair of socks my daughter had which depicted them all cozy, lovey-dovey with hearts around them?

Dude. I was appalled. 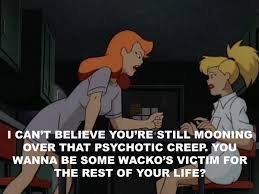 I know the relationship is not real. I know that this character, this personification of malignant narcissism that is the Joker, is fake. But how he treats Harley? As a DV survivor, twice over, this makes me cringe! I never want my child to think this shit is normal. A man hurting you to prove what you mean to him isn’t normal!

This couple is not relationship goals!

Even in doing a search for the images to use for this piece, I cannot tell you how many  images popped up of Joker hurting Harley–viciously!– or her making light of how crazy everything in their relationship is.

This is bigger than a pair of socks…

Their relationship is violent, volatile and psychotic. This is legit something I never want my daughter to know about. I never want her to know what a wound from a man that says he loves you feels like. Her mother does. For that reason, I cannot be silent while she grows up in a world that wants to consider this madness ‘a goal.’

I’m even willing to say that this observation is me being hyper vigilant. I can even concede that maybe this is a moment of me railing because I’m closer to 40 than I am to 20. But the part of me that is warrior, mother and survivor–nall.

This is why I let her read Marvel.