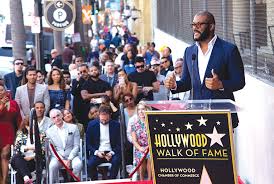 It has taken me three days to get to the point where I can put thought and excitement in the same space.

Tyler Perry has said that Hollywood obeys the ‘Golden Rule.’

Whomever has the gold, makes the rules.

In the middle of the eras of #OscarsSoWhite, Malignant Racism, diet fascism, and  the otherworldly shenangians of Orange Thanos, Tyler Perry, born as a little boy named Emmitt Perry, Jr., has made space where there could be none–in front of a world Ralph Ellison revealed in his novel Invisible Man is determined to not see anyone Black.

To control how Blackness is perceived.  Or depicted. Or control.

In the creation of this studio, this legacy, you see that the hustle–when done consistently–is lucrative. It is sustainable–and there is something to work for and towards!

I know there are detractors who made fun of this better than six-foot tall Black man with wide shoulders in a dress, playing up the most common stereotypes of Black women: a mammy (mammie). I remember the Black professor from USC, Dr. Todd Boyd, speaking about this as well as the historical significance of Stepin Fetchet  (born Lincoln Theodore Monroe Andrew Perry).

However, I want to challenge Dr. Boyd.

Those tropes still exist in modern cinema. They exist, they are propagated, and perpetuated not just by Black actors. There are White actors, especially in certain genres (namely horror) Black actors and actors were only seen as either magical or sacrificial. American cinema has a century head start on how Black people and other minorities are depicted. With that said, this achievement cannot be taken from him–even from people that look like him.

You can hate this move if you want to! But if you do, I pray that you never encounter an artist.

Or that they want to travel the world playing trumpet or violin.

I hope you fall in love with someone that refuses to get the safe job to make you feel happy. Then you will see what it means to build something, dedicate time and skill to something that you–and maybe only you for a duration–will ever get to see.

Helen Keller said the saddest thing is not to be blind, but to have no vision.

What Tyler Perry just did–What he encouraged every Black artist to do?–is incalculable. The journey towards greater visibility is ongoing, it will not, cannot end with Tyler Perry Studios. Now, let us all go forward. Encourage one another. Writers. Painters. Musicians. Photographers. Directors. Set Designers.

There is a power in the Put-On. Why? For the grace of God, go US.