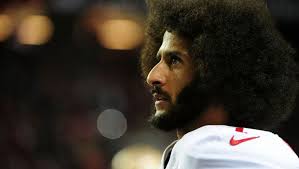 When I heard Kap would have try-outs this week, I was skeptical. Not because of his skill (the man is good!), but because of the pretense! I know Hue Jackson will be leading these try-outs, and I know 11 teams will be attending.

My brother and I even talked about where we would like Kap to settle at!

With that said, I have a shaky joy about it. Do I want Kap to get a career, to do the thing that he desired to do-that he was paid well to do? Yes, yes I do. But, what I cannot shake are the optics. This doesn’t look right.

I know not everyone boycotted the NFL, just like not everyone didn’t boycott Netflix for Mo’Nique. The nation is in a second wave of a Civil Rights Movement. I know that, at present, Kap is and does occupy a unique spot:  pillar, figurehead, template.

I am watching this closely. I have an uneasy peace about it. I want Kap to take his money, take his health, and just enjoy his life. I want him to not think he has to prove something. But, I also understand there is a need man to prove people wrong. To show people just why they where wrong about you. I can’t, I won’t, take that away from Kap.

The thing is this: I know when he get’s his shot, the problem doesn’t vanish.

When he gets his contract, he is still Black–and property–to the NFL.

Nothing is ‘solved’, nothing is over. Regardless of what Shawn Carter says, ‘the issue’ is not rectified, and there is no solution, aside from the dismantling of White Supremacy. Hiring Colin Kaepernick doesn’t solve ‘the issue’. It may even hedge and hide ‘the issue’ further.

I know Shawn is focused on the bag, and nothing else, so lemme help you.

‘The issue’ is police brutality, coupled with the willingness of White law enforcement officers to kill–not maim–unarmed African-American men. With the defense of, ‘I feared for my life.’

‘The issue’ is the fact a member of the National Football League–Colin Rand Kaepernick, #7–broke rank and dared to bring light to this issue; using the vessel of his celebrity and visibility to call attention to ‘the issue.’

‘The issue’ is professional football is a $2.3 billion juggernaut–whose owners are almost all White. These White men don’t want ‘their bag’ shortened, shorted by dissension in the ranks. Jerry Jones adopted this overseer mentality (which was probably there all along, frankly), saying ‘his players’ would be fined or cut if they decided to engage in the protest of ‘the issue.’

There are police officers in this nation whom kill unarmed Black men and women–with impunity. What is the use of visibility or celebrity if it cannot be wielded for the betterment of those whom remain and are unseen?

Someone needs to let Shawn know that we see, ‘the issue’; tell him when he gets done counting zeroes, we out here seeing cheeries we can’t eat.