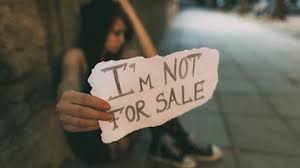 Cyntoia Brown-Long was a victim of sex trafficking. She spent almost half of her young life in the Tennessee Department of Corrections for killing a man. Please don’t think that the glow up on social media is instantaneous. I promise you that it isn’t.  The scary thing is that 1 in 6 women will a victim of sexual assault in their lifetime. What is not often discussed is sex trafficking, also known as human trafficking.

It can happen in public. Private parties. From random hook-ups. on BackPage. And on any social media site! This is not something that women make up, that they lie about people exaggerate about.

There are still people in the world that still buy women, still buy people, and are willing to trade in flesh–by any means necessary! There was a recent case in the Midwest (in St. Louis) where a woman was almost taken from a supermarket!

There was a man whom was following her through this store, and when she left, she saw that same man in a white van, driving towards her. This woman was a single mother, out at the store, in a major US city. Minding her business and was almost taken from all that she knew!

It can happen just THAT quick.

You don’t know what terror is until you have been a woman and followed for by someone you don’t know–and won’t leave you alone. What’s more? When you retell this experience to don’t believe you.  Or think it’s not possible.

The fact of the matter is, sex trafficking/intimate partner/human trafficking can happen to any woman! What’s more? It is more likely to happen to Black and Brown women. All it takes is for someone to orchestrate a situation for someone to be caught up in!

A girl answering a modeling ad–alone.

A young man going to a party with people he doesn’t know, with no idea where it is.

A group of girls going out and one guy just won’t leave her alone.

Are you feeling shooketh? Good. That  means you’re paying  attention. Look at these stats, just from Chicago:

Exploitation is always lucrative; there is always money in oppression. This is no different. There is nothing so prevalent, so pervasive, so great a commodity as unseen, unvalued people.

It just so happens that the most unseen commodity is minority women. For more confirmation, read This Bridge Called My Back.

The nasty part? This wouldn’t be pervasive a problem if it were not for the evil women that sometimes head these syndicates (remember the scandal involving and AKA advisor in Atlanta!)  or participate in them.

Not every woman is to be trusted.

Not every woman that smiles, is smiling at you–they are smiling because they caught you.

Beloveds, don’t get caught. Listen to your intuition. Know your surroundings. Realize the exits in a place. I’m not saying to be paranoid, but be aware. Please be aware.

Think of getting a Trusted Four. This something I found on social media today.  Peep this image:

Be safe y’all. As my good girlfriend said, echoing her father, “Don’t get lost.” But if you do, let someone find you.