I am a fan of jewelry.

I always have been. I think that the first time I saw a crown, I have wanted one for myself. I especially fave been fond of rings.

On and in my pursuit of trying to have a husband before any sense of life or self, I imagined what my wedding set would look like. I imagined Colin Cowie would do the reception (Google him!). I, in my Vera Wang gown, would walk in with Derek Jeter on my arm with cream and pink roses to a cheering chorus of about 200 people.

And the ring, darling? The ring!

I wanted the ring, size 7, platinum or white gold with princess cut diamonds. I imagine the rocks would glimmer, and shimmer in the light. It would be like holding all the rainbows in the world on my left hand. Our first dance? It Had To Be You by Harry Connick, Jr or Nothing Even Matters by Lauryn Hill. We would dance and I’d twirl, and I’d be a whole Queen forever.

Alas, that didn’t happen that way.

However, but I did think about this.  What is it about being chosen–getting chose, as I call it. What is so powerful about those words (“Will you marry me?”) and the appropriate answer (“Yes.”) that will allow women to put up with so much, for so long, in order to be chosen?  The best that my experience and failed relationships can garner is the reason why getting chose is so powerful is simple. Everyone wants to be special.

We all want to know there is someone in the world whom decides that they cannot live without us. That they ache for us, lose breath at the site of us. Can think of no other lips to kiss, not body to meld into, hand to hold other than ours. We want to have the affirmation that we belong to and with someone. Harlequin has made love and its storytelling a multi-million dollar business! I mean, it was the fiction of Nora Roberts that reminded me, showed me, that love deep, solid and mystic was not only possible–but available! And from her  Three Sisters Island series, I got this Gaelic phrase: 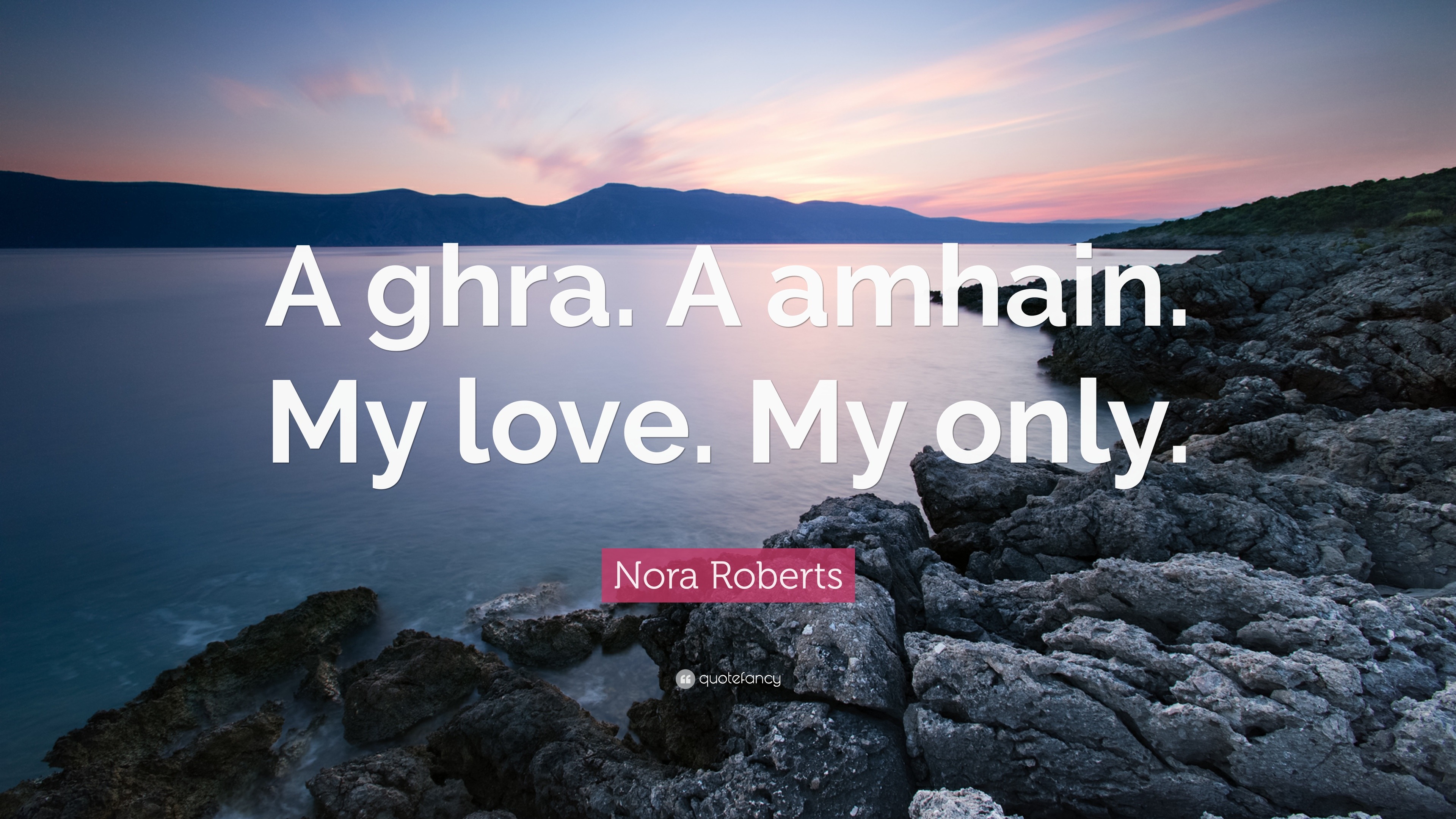 We all search for that, at the cost of ourselves, and complete selves. In the pursuit of being the love and the only to someone else, look at the behavior we consider. That we tolerate. That we endure. That we silence. For women, we do it in the pursuit of metal and rocks. This proof that we can–and have–endured all things toward the pursuit of this wearable proof that we were chosen. That we are the love, the only, the precious one.

At the cost of being special, we forsake warning signs. Don’t ask questions. Lie about answers. We hide from truths and wisdom from sources that have seen and lived longer. Being chose is better than being alone–so it is said. The beautiful thing about relationships is they are supposed to add to you, not define you. Not encompass and rule over you. Your partner is  not a trophy, but an asset.  A reminder that with this world and all its darkness, you are not alone to slay it. That you are worthy of something lasting, beyond a day–beyond a dress. More than any band, more than any Colin Cowie centerpiece.

Being chose is indeed magnificent. I myself have been chosen twice. What I have learned is that what problems were there before being chose, will be there after–waiting. They will amplify. They will irritate. They will root. They will embolden or embitter. Be careful dearest ones in the pursuit of being chose; that is only half of what is required. The other part? It matters who you are chosen by…

My dream wedding dress is a Vera Wang, and it is more than $5000.00. Without a veil. No shoes. Just the dress–cloth, dye and thread–is as much as a used car.

But, I found this dress while I was dating a man that tried to kill me in the apartment we lived in with his father and his girlfriend. I thought if I just loved him hard enough, he would see how badly he had treated me, and I would get my happily ever after. So, with that goal in mind, I looked for a dress.

From the dress, I registered with theknot  and was determined to make this man love me. I wanted him to love me like I loved him. It wasn’t until that relationship was over did I realize how askew my focus was. And just how detrimental that is. This isn’t the exact dress, but it’s damn close.

I tease people that I grew up as a pagan. I didn’t come to knowledge of faith in Christ until I was 8. I was baptized at 16. I wasn’t brought up in a house that made or put God as its center. But. after 16? I knew that sex before marriage was wrong. With that guilt, compiled with a me sleeping with my ex on a regular basis? I knew that marrying him would make everything go away. All the guilt. All the shame. Once I put on this white dress, this ring and told God I would be his wife–my absolution would be complete.

But here’s the rub.

It’s deeper than chastity. It’s deeper than spending more focus on a dress than on a relationship. The rub was prizing the decor and decorations over a lifetime. Being with someone in a dating relationship is much different that being with someone in a marriage. In the pursuit of trying to be chose (which I’ll discuss later), I put up with behavior I wouldn’t think of putting up with now.

Marriage is more than a wedding.

When people ask me what I think about relationships (which is actually pretty often), my advice is the same. I suppose now, with the most toxic relationship I have ever had being over almost 20 years ago, I have a unique vantage point. I stayed with a man that tried to kill me because he said he loved me. I stayed with him because after everything we had gone through, after everything he promised me, he owed me a ring.

The altar wasn’t a culmination. It was a finish line.

Marriage should be a culmination.

A wedding is a party.

Marriage is what you do when no one is looking. The staying together when the world around you goes to shit. You shouldn’t have to prove how much you love someone by how much you take. Love doesn’t require being emotionally trampled. Being someone’s wife doesn’t mean that you need to prove your ability to get back up after being knocked down.

Marriage doesn’t change who people are, not really. It fortifies and reveals who they are! It shows if you have the ability to compromise, to be selfless or selfish. Can you compromise? Can you, do you hold grudges? Can you put do what is necessary because it has to be done? And the most important thing to consider:  can you want the best for someone whether it benefits you or not?

Can you allow this person that you chose, and whom has chosen you, to grow? To mess up? To forgive and be forgiven by? Do you have the stamina to really love someone?

If you don’t, if you cannot fathom such a thing beyond sex, then don’t bother picking a dress. Or buying a ring.

I am a woman of faith. I believe in God and the power of His word and wisdom. The one thing that has struck me is this scripture:

He that findeth a wife, findeth a good thing and obtain favor from the Lord.

With the wisdom found in this 15-word scripture, I feel,  has not been hewn out. Let me  tell you and unsweet truth.

Not every man is looking to for a wife.

Not every woman wants a husband.

There, now that we have established these two truths, let’s talk about The Seeking Game. This is also known as dating. Yes, dating.

On the cusp of turning 40, I quote my mother often. The quotes I cherish above any others deal with dating and relationships. This one is a favorite: “There ain’t nothing wrong with dating!”  Now, my mother is almost 70. She is from an era that women expected a man to bring something to a relationship. Where criteria were created, held and appreciated. In the situations where there weren’t, a woman left. In that phrase, ‘there ain’t nothing wrong with dating’, gave me the freedom as a woman that was dating to be honest with the men I was attracting.

It also reminded me of my criteria, and what I wanted. It reminded me that the man that  want, has to match what I need as well! If I want to be a wife, I can’t be caught up with a man that doesn’t want one! Simple as that.

You have to be able to be honest with yourself when you date! You have be able to be alone with your thoughts. If you want to date casually, do that. If  you want to date with purpose, do that. But you have to make a decision! And that level of decision-making, is going to take a level of honesty few people are prepared for. Why? People don’t like to be alone, and we crave comfort and routine. As one of my girlfriends said:  Some people stay together out of time and convenience rather than loyalty.

The most irrecoupable thing you have as a human being is time. Once that is gone or wasted, there is nothing which can be done to snatch it back from that hungry abyss. Value what you bring. Value your criteria. Value your time.